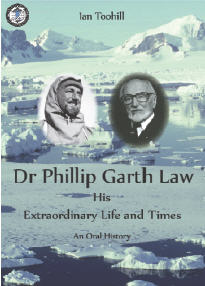 Over a period of nineteen years (1947-1966) he developed the Australian National Antarctic Research Expeditions (ANARE) scientific programme, established Australia’s three permanent Antarctic continental stations and directed the exploration of some 4 800 kilometres of Antarctic coast and 1.3 million square kilometres of then unknown Antarctic territory, as well as devising the administrative machinery to establish Australia’s Antarctic Division, which he headed.

He also played a prominent part in the creation and development of the Antarctic Treaty and The International Scientific Committee on Antarctic Research (SCAR). He made a total of 28 voyages to Antarctica and its sub-Antarctic regions.

From 1966 to 1977 he was Executive Vice-President of the Victorian Institute of Colleges (VIC) which led the way in developing Australia’s national system of colleges of advanced education.